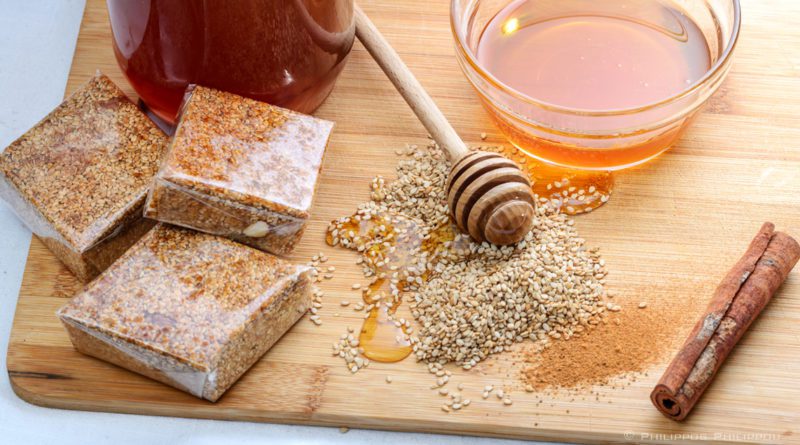 Partner 3: Association for the Development and Progress of the Dodecanese – DETAP

Melekouni is a traditional sweet, produced on the island of Rhodes. Its shape is rhomboid and its main ingredients are sesame, honey, spices, almonds and optionally zest and/or juice of citrus fruits, which are mixed, boiled and homogenized. Its colour is golden yellow to brown αnd it has a soft, flexible texture that doesn’t break, a chewy non-sticky and compact structure and smells of spices and citrus fruits, which are released in harmony during unpacking and intensively during chewing.

Melekouni is the special treat of the Rhodian marriage since ancient times until nowadays and is traditionally produced in local workshops or houses. The name Melekouni is derived from the Rhodian dialect, since the term “kouni” (from the ancient Greek word kokkos-kounni) is used in the region to yield the seed (in that case the sesame), the minimum seedling of the grain of the plant “sesamon” and the Greek word “meli” (honey). The reputation of “Melekouni” is documented in numerous references since the antiquity.

The bond between the product and the geographical area is based on the reputation of the product. “Melekouni” has a strong tradition and a long-standing reputation that links it to the island. Since the ancient times it has been a traditional local confection offered at weddings, baptisms and other social events. Indicatively, “Melekouni” was called the exchange currency of Rhodes, which allowed members of a network of people from Rhodes to exchange products and services without money.

The most important official recognition of the product took place during a special event in Rhodes (26/9/2010) for the production of the longest Melekouni in the world, which was registered in Guiness World Records as“The longest melekouni, traditional Rhodian dessert…” while later it was certified as a Product of Geographical Indication (PGI) by the European Union. The geographical production area for “Melekouni” is the island of Rhodes, which belongs to the Prefecture of the Dodecanese of the South Aegean Region (Rhodes is the largest island in the Dodecanese with an area of 1.407,9 km2 and is located about 350 km southeast from Athens).